What, Peacock eggs this early in the peafowl breeding season!

This week on Monday 5th of March 2017 our first peacock egg of the season was laid in one of the white peafowl pens. This was closely followed by another egg in the same pen yesterday.

So will these eggs be fertile?  Usually the first peafowl eggs laid during the peafowl breeding season are less fertile than peacock eggs laid later during the season.  We will put the peacock eggs into the incubator and monitor fertility carefully.

It is really important to ensure the incubator is scrupulously clean before starting to set the peacock eggs.  Each year at the end of the peacock breeding season I clean and disinfect all the incubators, hatchers, egg trays and all other equipment.

This weekend I will be re cleaning and disinfecting all the equipment again ready to set the peafowl eggs into the incubator.

We clean all the peafowl eggs in luke warm water and leave them to dry naturally.  All the eggs are marked with breed of peafowl and the pen the eggs are laid in. This way we can identify what the parentage of the eggs are. 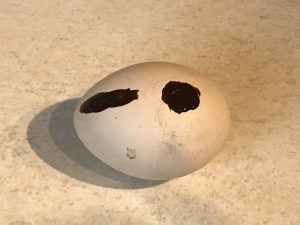 One of the peafowl eggs has a small crack in it, some people will throw these away. I always try to incubate these eggs to give them a chance. First I need to repair the peacock egg prior to setting into the incubator.

To make this repair I use nail varnish. Paint varnish over the crack with three coats to create a waterproof seal on the peacock egg. Treat this egg as a normal egg.  Not all repaired peafowl eggs will develop, however I have had some success with this method of repair.

Previous: The breeding season for peacocks begins
Next: A False Start to the 2017 Peafowl Breeding Season