When do Peacocks shed their feathers?

Every year peacocks shed their feathers?

A peacock reaches maturity at three years old. At the end of every mating season the male peacocks shed their feathers.  This can happen very quickly with a mature peacock losing all it’s tail feathers within a week.  However other peacocks will not loose their tail until September, with a few stubborn tail feathers clinging on for months.

At maturity the peacocks tail will be constant each year as long as the peacock is in good health.

If several males are kept together we have found that the subservient males will not grow or develop a tail as striking or large as the dominant peacock.  If these birds are removed from the pen with the dominant male the upper tail feathers then develop!

After the peacocks long tail covers have moulted the new tail begins to grow in the autumn, reaching maturity in time for the next mating season in the spring.

The peafowls tail and fertility 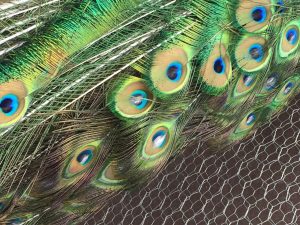 Once the peafowl tail has moulted the peacock is no longer fertile.