In captivity peafowl can live up to 23 years old, in the wild they will only live to around fifteen years old. 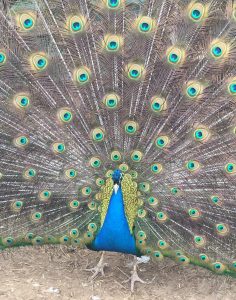 Peacocks are polygamous and the peafowl breeding season in the UK is between the months of March and August. The dates of the Peafowl breeding season are dependent on weather patterns. Indian Blue Peafowl reach sexual maturity at 2-3 years old.  The peahens lay eggs in small dug out indents on the ground where they are  susceptible to predators such as foxes.

The peahens will sit on up to 6 eggs, however the hatch rate is poor. This is because the peahen will break eggs or get off the nest and leave eggs to get cold.  Results show better hatch rates are achieved with artificial incubation due to consistency of conditions.  When eggs are removed from the peahen after laying, the peahens will lay up to 20 eggs a season.

To see our Indian Blue Peafowl For Sale Click Here

Back to Peafowl Breeds