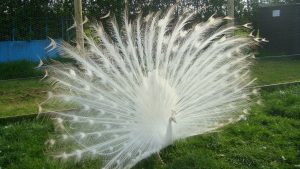 Contrary to popular opinion White Peafowl are a colour mutation of the Indian Blue Peafowl, not albinos. The lack of colour in the White Peafowls feathers is determined by pigment and structure. With White Peafowl their unusual lack of colour is due to a missing pigment. The missing pigment is dark and interferes with light. These are the most popular Peafowl within the UK after the Indian Blue Peafowl. White Peafowl were the first recognised colour mutation and can be found in  the wild in India. The birds are completely white with blue seeing eyes.  There is a very slight discolouration to the ocelli on the White Peacocks tail. Both the male and female White Peafowl are very similar until they are 12 months old. Then it becomes easier to distinguish the male as the peacock has slightly longer legs than the peahen.

The peacock also develops slightly longer feathery tail coverts at about 12 to 14 months. The peacock is also slightly larger build than the white peahen.

The White Peachicks are born with yellow down and blue seeing eyes. Within days the white peachick develops white tips to their wings.  As they mature the yellow down is replaced by pure white feathers.

At Peacocks UK we always have white peafowl for sale. Contact us on 07711 119888 to see what White Peacocks for sale are available.

Back to Peafowl Breeds