We say goodbye, as the peacocks lose their tails

We have not determined yet what will make one peacock lose their tails early in the season. While another peacock will hang onto his tail until the end of August or into September. This year the rare Silver Pied Peafowl were the first to start to drop their tails.  Early July we found the first feather on the ground in the peacock pens.  Within two weeks it was all over for all the Silver Pied Peacocks. This made me wonder if the time the peacocks lose their tails is breed specific. I watched every day to see who would be next.

But there was not another peafowl pen where all the peacocks lost their tails at once.  Over the next few weeks an individual peacock would lose his tail, the other peacocks within the pen would keep theirs for a few more weeks.

We collect the feathers when the peacocks lose their tails 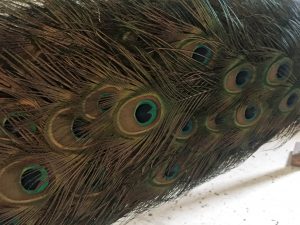 Every day we pick up feathers from the pens. Each day the peacocks lose a little more of their train.

Early August I sold six peacocks to a hotel, that insisted that the peacocks had to have full mature trains.   I explained that the tail feathers would be moulting shortly. However I was told that was OK as long as they had full tails now!  The peacocks were needed for a photo shoot and once the pictures had been taken it would not matter then if the tails dropped out!

Last year my alpha Black Shouldered male was the last to loose his tail.  He clung onto his last three feathers long after all the rest had gone, well into October.

Now we just need to wait until October to start to see the new feathers peeking through as these amazing peacocks start to grow their new tail.

Previous: The peahens are still laying peafowl eggs
Next: Two peacocks instead of a pair of peacocks